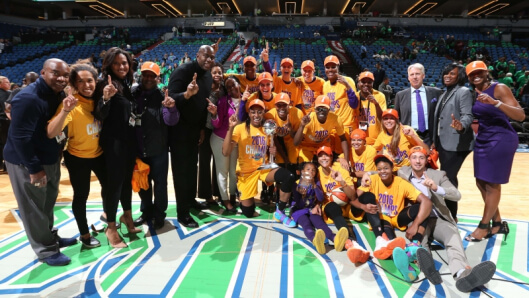 The 2016 WNBA Finals was the best-of-five championship series for the 2016 season of the Women’s National Basketball Association (WNBA). The top-seeded Minnesota Lynx held home-court advantage in the Finals but lost three games to two to the second-seeded Los Angeles Sparks. The series followed a 2–2–1 format and eschewed the previous tradition of having the Western Conference champion face the Eastern Conference champion. Instead, in the 2016 season, the top eight teams qualified for the playoffs, regardless of conference. Both WNBA Finals teams were from the Western Conference. The Sparks won a semifinal series against the Chicago Sky to determine one of the Finals berths; the first-seeded Lynx defeated the Phoenix Mercury to earn the other. Candace Parker was named the 2016 WNBA Finals MVP. Renee Brown, outgoing Chief of Basketball Operations and Player Relations of the WNBA, issued statements following games 4 and 5 saying the referees had made an error in each game. Nevertheless, the Sparks won the series 3 games to 2.