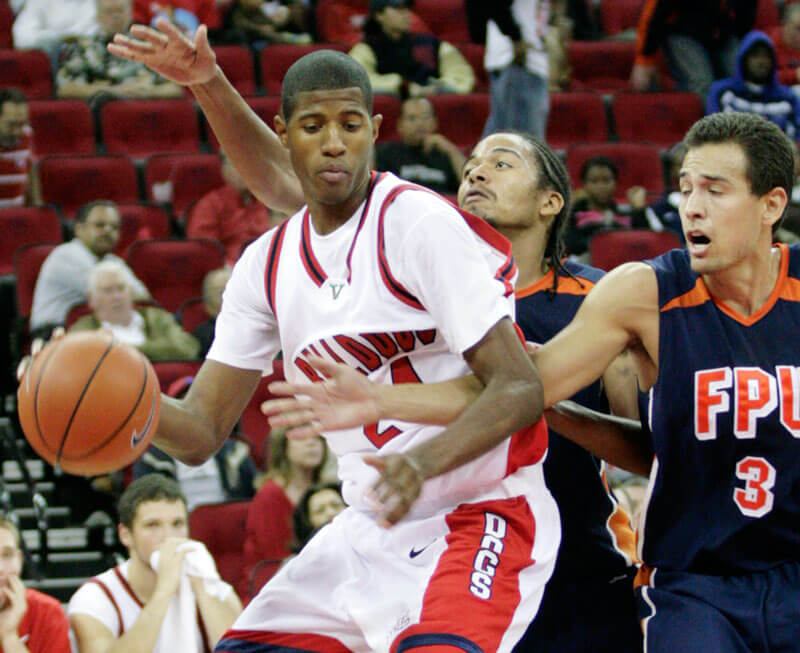 George played two years at California State University, Fresno, more commonly known as Fresno State. In his first game with the Bulldogs, he scored 14 points in a winning effort against Sacramento State. In the following game, George recorded 25 points and 10 rebounds in a losing effort against Saint Mary’s. Despite the loss, he made an impression with his one-handed slam dunk over Mickey McConnell that earned him SportsCenter‘s number 1 “Play of the Day” for November 18, 2008. On February 9, 2009, he scored a then career-high 29 points to lead the Bulldogs to an 88-82 victory over Boise State. In the 2009 WAC Tournament, the Bulldogs were matched up against Hawaii and advanced to the quarterfinal against the top-seeded Utah State Aggies. During the game, he forced a career-high 5 steals and finished with a team-high 16 points; however, despite his effort, the Bulldogs lost, 85–68. With a 13–21 record, the team failed to qualify for the 2009 NCAA Tournament. He led the Western Athletic Conference (WAC) in minutes played (1,176) and finished second in 3-point shooting (44.7%), steals (59), and steals per game (1.74). His 3-point field goal percentage was the third-best in the Fresno State Bulldogs men’s basketball program. He started all 34 games and finished the season averaging 14.3 points, 6.2 rebounds, 2.0 assists, and 1.7 steals per game on 47.0% from the field.

Entering his sophomore season, he was named the most entertaining player in the West region and the eighth-most entertaining player in college basketball by Sports Illustrated in their list of the “Top 16 Most Entertaining Players in College Basketball”. On January 21, 2010, he sprained his right ankle against Utah State and missed the next four games. He made his return on February 11, scoring a career-high 30 points in a winning effort over eventual WAC Tournament champion New Mexico State. During the 2010 WAC Tournament, he recorded 22 points and 11 rebounds, but his team lost to Louisiana Tech in the quarterfinals. The team finished the season 15–18, with George averaging 16.8 points, 7.2 rebounds, 3.0 assists, and 2.2 steals while shooting 42.4 percent from the field and 90.9 percent from the line. He was named All-WAC Second-Team and ranked second in the WAC in free throw percentage (90.9%), steals (64), and steals per game (2.2).