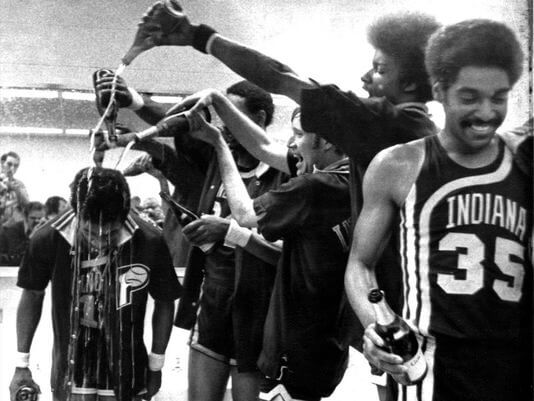 The Kentucky Colonels, despite finishing the season with the best record in the history of the ABA (68-16, .810), winning 8 of 11 regular season games against the New York Nets and finishing 24 games ahead of the Nets in the regular season standings, lost their first round series to the Nets.

The Floridians played their final game on April 6, 1972, losing at home in their Eastern Division semifinal series to the Virginia Squires 115-106. The Squires swept the series 4 games to none behind rookie Julius Erving who grabbed at least thirty rebounds in three of those four games. On June 13, 1972, the league bought the Floridians and disbanded the team.

The Indiana Pacers became the first team to win a second ABA championship.

Freddie Lewis of the Pacers was the Most Valuable Player of the ABA playoffs.

This was the first season in which two future NBA teams met for the ABA Championship. This only happened one other time in the league’s history, during its final year in 1976 when the Denver Nuggets edged past the Colonels 4-3 to meet the Nets in the ABA championship series.

Five of the seven playoff series ended in final games in which the home team lost.