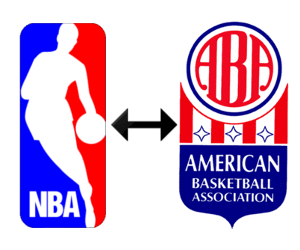 Even though playoff success would elude the team, the Spurs had suddenly found themselves among the top teams in the ABA. Moreover, their gaudy attendance figures made them very attractive to the NBA, despite the size of the market. Although San Antonio had over 650,000 people at the time and has since grown to become the seventh-largest city in the United States, it has always been a medium-sized market because the surrounding suburban and rural areas aren’t much larger than the city itself. In June 1976, the ABA-NBA merger took place, moving San Antonio’s sole professional sports franchise into a new league. The Spurs, Denver Nuggets, Indiana Pacers, and New York Nets moved to the NBA for the 1976 – 1977 season.