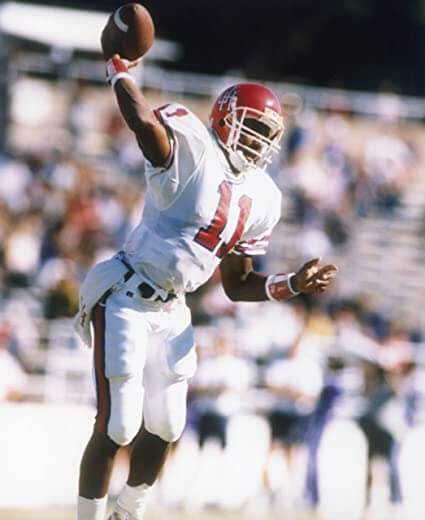 Ware grew up in the Galveston, Texas region, hoping to play football at the University of Texas. He said “I was going to Texas. All they had to do was lie to me and tell me I was going to play quarterback once I got there. Thank goodness they told me the truth [that] they were going to move me to the defense.” After graduating from Dickinson High School, Ware instead played at the University of Houston, where he won the Heisman Trophy in 1989, along with the Davey O’Brien Award, the latter award given to the most outstanding college quarterback of the year. That year, his junior year, he threw for 4,699 yards, 44 touchdowns, and set 26 NCAA records. Many of the records were thanks to the innovative use of the run and shoot offense, which his successor, David Klingler, also used to great effect. The Cougars ended the season ranked the #14 team in the nation by the Associated Press. He then declared for the NFL Draft, foregoing his senior year.