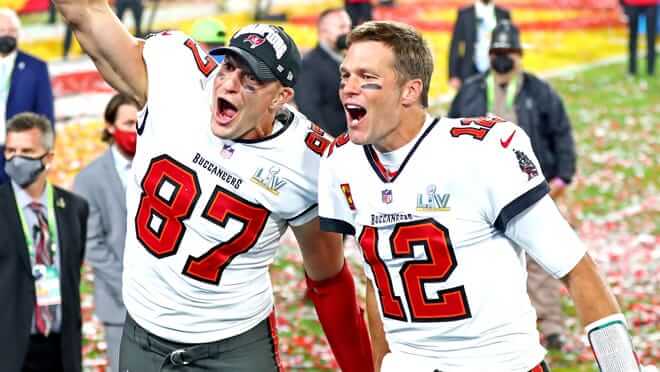 Super Bowl LV was an American football game played to determine the champion of the National Football League (NFL) for the 2020 NFL season. The National Football Conference (NFC) champion Tampa Bay Buccaneers defeated the American Football Conference (AFC) champion Kansas City Chiefs, 31–9. The game took place on February 7, 2021, at Raymond James Stadium in Tampa, Florida, the home stadium of the Buccaneers, marking the first time that a team hosted a Super Bowl. Due to COVID-19 protocols limiting the stadium’s seating capacity to 25,000 fans, it was the least-attended Super Bowl.

The Buccaneers’ victory was their second and made them the only team other than the Baltimore Ravens to be undefeated in multiple Super Bowls. They finished the regular season with an 11–5 record and a wild card berth to advance to their second Super Bowl appearance through the guidance of several new acquisitions, most notably veteran quarterback Tom Brady in his first season away from the New England Patriots. The Chiefs finished the regular season with a league-best 14–2 record to advance to their fourth Super Bowl appearance and entered the game as defending Super Bowl LIV champions, seeking to become the first repeat champions since the Patriots in 2004.

Kansas City entered the game favored to win but was undone by offensive struggles and costly penalties. For the first time under quarterback and reigning Super Bowl MVP Patrick Mahomes, the Chiefs failed to score a touchdown and lost by double-digits, making them also the third Super Bowl team to not score a touchdown. They committed 11 penalties for 120 yards, including a record eight penalties for 95 yards in the first half, which were mostly called on the defense. The Buccaneers capitalized off these mistakes to take a commanding 21–6 lead at halftime and remained in control for the rest of the game. Brady extended his individual player records for Super Bowl appearances at 10, wins at seven, and Super Bowl Most Valuable Player Awards at five, while also being the oldest quarterback to win a Super Bowl and be named SB MVP at age 43. Buccaneers head coach Bruce Arians also became the oldest to win a Super Bowl at 68.