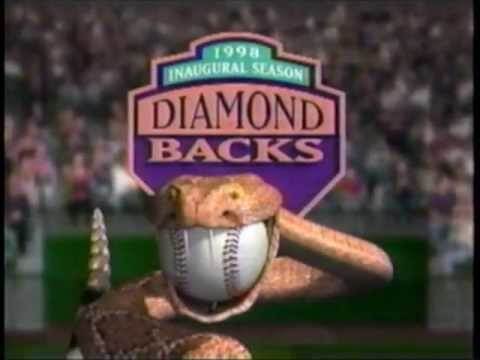 In the fall of 1993, Jerry Colangelo, the majority owner of the Phoenix Suns, the area’s NBA franchise, announced he was assembling an ownership group, “Arizona Baseball, Inc.”, to apply for a Major League Baseball expansion team. This was after a great deal of lobbying by the Maricopa County Sports Authority, a local group formed to preserve Cactus League spring training in Arizona and eventually secure a Major League franchise for the state. On March 9, 1995, Colangelo’s group was awarded a franchise to begin to play for the 1998 season. A $130 million franchise fee was paid to Major League Baseball. The Tampa Bay Area was also granted a franchise, the Devil Rays (to be based in St. Petersburg), at the same time. According to the original press release from Colangelo’s group which remained posted on the team website during the first few seasons the chosen team colors were Arizona turquoise, copper, black and purple. “Turquoise was chosen because the greenish-blue stone is indigenous to Arizona, copper because Arizona is one the nation’s top copper-producing states, and purple because it has become a favorite color for Arizona sports fans, thanks to the success of the National Basketball Association’s Phoenix Suns.”