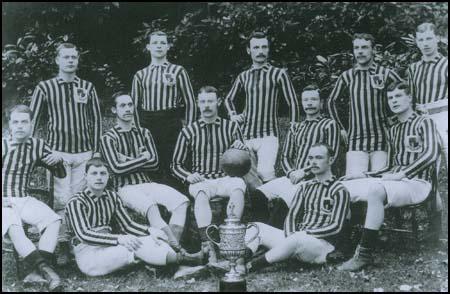 Aston Villa Football Club was formed in March 1874, by members of the Villa Cross Wesleyan Chapel in Handsworth which is now part of Birmingham. The four founders of Aston Villa were Jack Hughes, Frederick Matthews, Walter Price, and William Scattergood. Aston Villa’s first match was against the local Aston Brook St Mary’s Rugby team. As a condition of the match, the Villa side had to agree to play the first half under Rugby rules and the second half under Association rules. After moving to the Wellington Road ground in 1876, Villa soon established themselves as one of the best teams in the Midlands, winning their first honor, the Birmingham Senior Cup in 1880, under the captaincy of Scotsman George Ramsay.