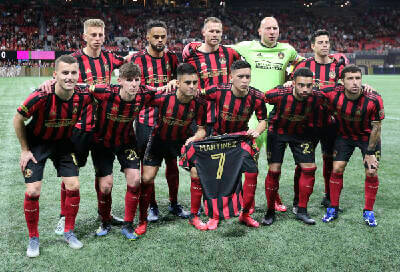 Atlanta’s first regular-season MLS game was played on March 5, 2017, at Bobby Dodd Stadium with 55,297 in attendance. Yamil Asad scored the first goal in team history in a 2–1 loss to New York Red Bulls. A week later, the team registered its first win with a 6–1 away defeat of fellow expansion team Minnesota United FC. On March 18, 2017, the team registered its first win at home, beating Chicago Fire, who went down to ten men in the eleventh minute, 4–0 in front of a sold-out Bobby Dodd Stadium. Following its move to Mercedes-Benz Stadium, the team continued leading the league in attendance and averaged more than 48,000 in its home league matches, breaking records for attendance for a non-doubleheader MLS game and average single-season attendance for a U.S. soccer team. Atlanta clinched a berth in the playoffs, becoming the third MLS expansion team to do so in their inaugural season, by finishing tied for third place in the Eastern Conference; due to tiebreaking rules, Atlanta was seeded fourth. In its first playoff game, the team faced Columbus Crew and set a then-MLS attendance record for a playoff game with 67,221 spectators in attendance. After 120 minutes of scoreless action, the match was decided by a penalty shoot-out, which Columbus won 3–1 to eliminate Atlanta.