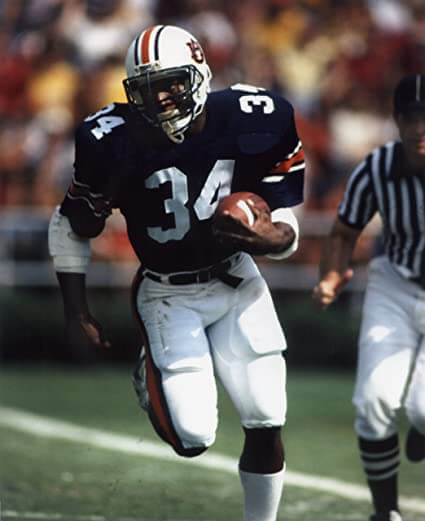 During his time playing for the Auburn Tigers football team, he ran for 4,303 career yards, which was the fourth-best performance in Southeastern Conference (SEC) history. Jackson finished his career with an average of 6.6 yards per carry, which set the SEC record (minimum 400 rushes).

In 1982, Jackson’s freshman year, Auburn played Boston College in the Tangerine Bowl, where Jackson made a one-handed grab on an option pitch. Auburn went on to win the game 33–26 as Jackson rushed 14 times for 64 yards and 2 touchdowns.

In 1983, as a sophomore, Jackson rushed for 1,213 yards (1,109 m) on 158 carries, for an average of 7.7 yards per carry, which was the second-best single-season average in SEC history (minimum 100 rushes). In the 1983 Auburn-Alabama game, Jackson rushed for 256 yards on 20 rushes (12.8 yards per carry), which at the time was the sixth-most rushing yards gained in a game in SEC history and the 2nd best yard-per-rush average in a game (minimum 20 attempts) in SEC history. Auburn finished the season by winning the Sugar Bowl against Michigan, where Jackson was named Most Valuable Player. In 1984, Jackson’s junior year (most of which Jackson missed due to injury), he earned Most Valuable Player honors at the Liberty Bowl after defeating Arkansas.

In 1985, Jackson rushed for 1,786 yards which were the second-best single-season performance in SEC history. That year, he averaged 6.4 yards per rush, which at the time was the best single-season average in SEC history. For his performance in 1985, Jackson was awarded the Heisman Trophy in what was considered the closest margin of victory ever in the history of the award, winning over the University of Iowa quarterback Chuck Long.

Jackson finished his career at Auburn with 4,575 all-purpose yards and 45 total touchdowns, 43 rushings, and 2 receiving, with a 6.6 yards per carrying average. Jackson’s football number 34 was officially retired at Auburn in a halftime ceremony on October 31, 1992. He is one of only three numbers retired at Auburn. The others are 1971 Heisman Trophy winner Pat Sullivan’s number 7, and the number 88 of Sullivan’s teammate and favorite receiver, Terry Beasley. In 2007, Jackson was ranked #8 on ESPN’s Top 25 Players In College Football History list.