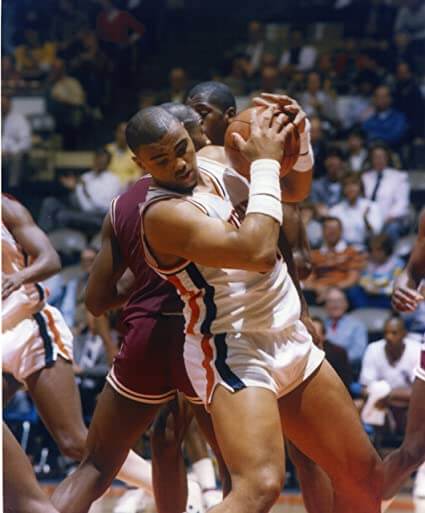 Barkley played collegiate basketball at Auburn for three seasons. Although he struggled to control his weight, he excelled as a player and led the SEC in rebounding each year. He became a popular crowd-pleaser, exciting the fans with dunks and blocked shots that belied his lack of height and overweight frame. It was not uncommon to see the hefty Barkley grab a defensive rebound and, instead of passing, dribble the entire length of the court and finish at the opposite end with a two-handed dunk. His physical size and skills ultimately earned him the nickname “The Round Mound of Rebound” and the “Crisco Kid.”

During his college career, Barkley played the center position, despite being shorter than the average center. His height, officially listed as 6 ft 6 in (1.98 m), is stated as 6 ft 4 in (1.93 m) in his book, I May Be Wrong but I Doubt It. He became a member of Auburn’s All-Century team and still holds the Auburn record for career field goal percentage with 62.6%. He received numerous awards, including Southeastern Conference (SEC) Player of the Year (1984), three All-SEC selections and one Second Team All-American selection. Later, Barkley was named the SEC Player of the Decade for the 1980s by the Birmingham Post-Herald.