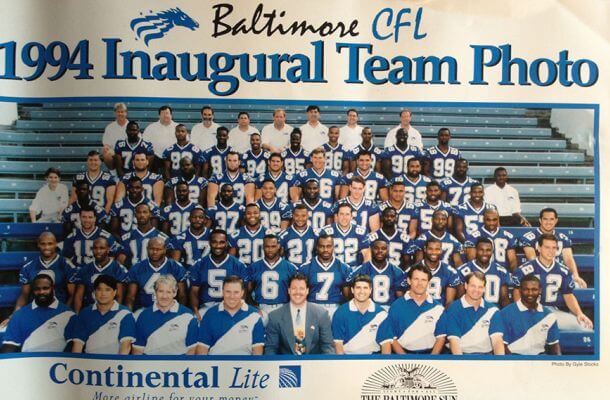 Soon after the expansion effort failed, an entrepreneur and former Washington Redskins assistant Jim Speros was granted a CFL expansion franchise for Baltimore that would play in Memorial Stadium, the Colts’ old home. Attempting to capitalize on the city’s love for its long-lost Baltimore Colts, Speros adopted a color scheme that added silver to the Baltimore Colts’ traditional colors of blue and white, as well as a stylized horse’s head logo. He also invited the old Baltimore Colts Marching Band, which had stayed together along with the old team’s uniformed cheerleaders for over a decade, to play at his games and recruited the remaining Baltimore Colts football fan clubs (“Colt Corrals”) to follow and support the new CFL franchise. He initially called the team the “Baltimore CFL Colts.” However, the NFL went to court and successfully obtained a legal injunction against the franchise’s use of any version of “Colts” in their name just hours before the team was to play its first game. Speros not only had to discard tons of purchased merchandise and souvenirs along with an advertising campaign, but also had to quickly change the franchise’s official name to the “Baltimore Football Club” (which some just called the “Baltimore CFL’s”) while keeping the team’s distinctive horse’s head logo.

Local fans tended to continue referring to the team as the “Baltimore Colts” anyway, and team officials tacitly encouraged this. For example, for most of the 1994 season, Memorial Stadium’s public address announcer, Jack Taylor, would announce the team as “your Baltimore CFL…” – followed by a pause, during which time the crowd shouted “COLTS!” – after which he would conclude, “…football team.”