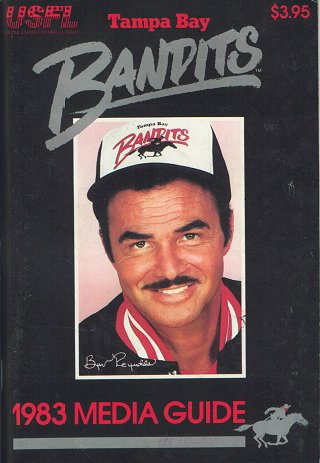 The Tampa Bay Bandits’ majority owners were Canadian businessman John F. Bassett (who was still in litigation against the NFL over his previous Memphis Southmen franchise from the World Football League in the mid-1970s) and Miami attorney Steve Arky. Minority owners included Hollywood mainstay Burt Reynolds, a former college football player who at that time one of the most popular motion picture actors in the world.

Bassett’s original plan was to place his team at Ivor Wynne Stadium in Hamilton, Ontario. Not only was this outside the league’s namesake the United States, but it would have been by far the smallest market during the USFL’s first season had it gone through; Bassett intended to draw from Southern Ontario, the largest market in Canada when factoring in nearby Toronto, and possibly from Buffalo as well (coincidentally, Buffalo’s National Football League team, the Buffalo Bills, was one of the teams most negatively impacted by the USFL’s existence, even without a team less than 50 miles away from its home stadium as originally proposed). Hamilton also had the advantage of not having any other major league sports outside the Canadian Football League’s Hamilton Tiger-Cats with which the team would have competed). Canadian government officials were dead-set against any other league challenging the CFL’s monopoly on professional football in Canada, even if they played in different seasons, and Senator Keith Davey, a former CFL commissioner, threatened to re-introduce the Canadian Football Act, a 1974 unpassed bill (proposed in the wake of Bassett’s previous proposal to put the Southmen in Toronto) that would have had the government endorse the CFL’s monopoly and prohibited any other league from playing in Canada. Bassett’s proposal came at a time when the CFL’s Montreal Concordes had been saved from bankruptcy in 1981, two years prior to the USFL’s launch (the Concordes would collapse again in 1987).

Davey’s threat was enough to make Bassett move the team to Tampa. The team is incorrectly presumed to be named the Bandits due to Reynolds’ appearance in the hit Smokey and the Bandit movies; it was named after the owner’s daughter’s German Shepherd dog. Also, building interest was the hiring of former Florida Gator and Tampa Bay Buccaneers quarterback Steve Spurrier to be the team coach. Spurrier had been serving as the offensive coordinator at Duke University before coming to Tampa to take his first head coaching job. At 37, he was the youngest head coach in professional football at the time.