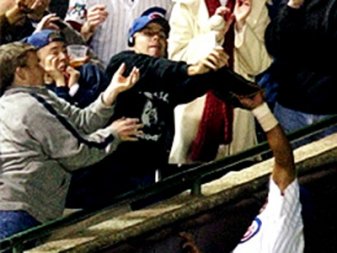 The Steve Bartman incident occurred during a Major League Baseball playoff game between the Chicago Cubs and the Florida Marlins on October 14, 2003, at Wrigley Field in Chicago.

In the eighth inning of Game 6 of the National League Championship Series, with Chicago ahead 3–0 and holding 3 games to 2 lead in the best of 7 series, several spectators attempted to catch a foul ball off the bat of Marlins’ second baseman Luis Castillo. One of the fans, Steve Bartman, reached for the ball, deflecting it and disrupting a potential catch by Cubs outfielder Moisés Alou. If Alou had caught the ball it would have been the second out in the inning, and the Cubs would have been just four outs away from winning their first National League pennant since 1945. Instead, the Cubs ended up surrendering eight runs in the inning and shortly afterward lost the game, 8-3. When they were eliminated in the seventh game the next day, the “Steve Bartman incident” was seen as the “first domino” in the turning point of the series.