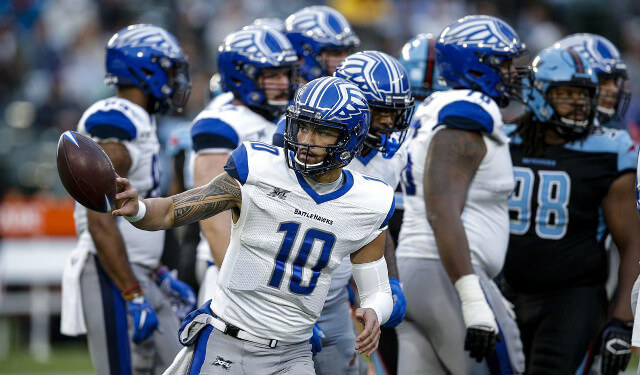 The BattleHawks are the only XFL team not to share its market with a current National Football League franchise; St. Louis had hosted NFL football in 1923 with the All-Stars, 1934 with the Gunners, 1960 to 1987 with the Football Cardinals, and again from 1995 to 2015 with the Rams, which relocated to Los Angeles in the 2016 season. There is a significant negative sentiment against the NFL in St. Louis, as both the Cardinals and Rams relocated to new markets, citing a division between the teams’ ownership and both the city & county governments of St. Louis to adequately provide a new stadium and the unacceptable condition of the Dome at America’s Center. (The Dome was the last NFL stadium to be built with a fully opaque and fixed roof, which led to a lack of ambient light and, coupled with the Rams’ decision to switch to a darker uniform color palette in the early 2000s, resulted in one of the darkest stadium environments in the NFL.) As St. Louis was one of the most recent cities to lose an NFL team, with acceptable facilities by XFL standards, the area was seen as a good choice to take advantage of a newly empty football market.

St. Louis has very little history of hosting alternative professional football. None of the major alternative outdoor leagues of the late 20th and early 21st centuries had a team there, and the Arena Football League’s only presence was the St. Louis Stampede of 1995 and 1996. Some indoor football teams have played at Family Arena in suburban St. Charles, Missouri, including the RiverCity Rage and River City Raiders. St. Louis has also been devoid of NCAA Division I Football since 1949, when the Saint Louis University Billikens dropped football as an intercollegiate sport; the nearest FBS football squad, the Missouri Tigers, play in Columbia.

The St. Louis BattleHawks share the Missouri winter sports market with one other major professional team, the National Hockey League’s St. Louis Blues, and with the Billikens’ and Tigers’ college basketball teams.