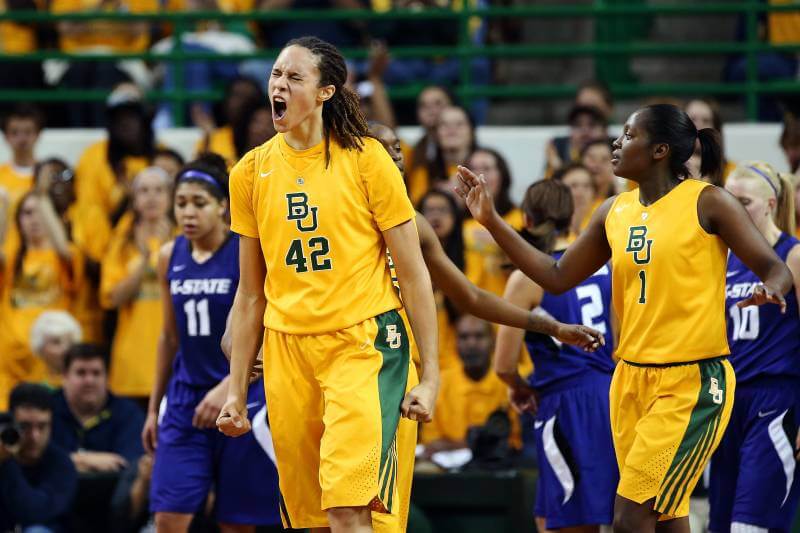 Griner played college basketball at Baylor University in Waco, Texas. As a freshman, Griner’s 223 blocked shots set the all-time single-season record, establishing her as one of the greatest shot blockers in women’s basketball history. On December 16, 2009, Griner recorded Baylor’s first triple-double with 34 points, 13 rebounds, and Big 12 Conference record 11 blocked shots. In January 2010, she became only the seventh player to dunk during a women’s college basketball game, and only the second woman to dunk twice in a single college game, making the second and third dunks of her college career in a lopsided 99–18 victory against Texas State University.

On March 3, 2010, Griner and Texas Tech player Jordan Barncastle was battling for position near the lane. As a foul was being called on Barncastle, Griner took two steps forward and threw a right-handed roundhouse punch which broke Barncastle’s nose. Griner was then ejected from the game. Lady Bears coach Kim Mulkey then imposed another one-game suspension in addition to the one-game suspension mandated by NCAA rules.

Baylor entered the NCAA Tournament as a 4th seed and knocked off top-seeded Tennessee in the Sweet 16. On March 22, Griner set an NCAA tournament record with 14 blocked shots in a 49–33 win against the Georgetown Hoyas. In the Elite Eight, Baylor defeated Duke 51–48, and Griner blocked 9 shots, totaling 35 for the tournament, a new NCAA Women’s Tournament record. Duke’s Alison Bales had held the previous record of 30 blocks in the 2006 NCAA Women’s Tournament. Baylor reached the Final Four, before losing to eventual-champion UConn, 70–50. Griner was named an AP Second Team All-American.

As a sophomore, Griner received First Team All-American honors after averaging 23 points a game, including a career-high 40 points against Green Bay in the Sweet 16.

In her junior season, Griner averaged 23.2 points, 9.4 rebounds, and 5 blocks per game. She blocked more shots than any other Division I women’s team that season. Griner was named AP Player of the Year and The 2012 Premier Player of Women’s College Basketball.

On April 3, 2012, Griner led Baylor with 26 points, 13 rebounds, and 5 blocked shots to win the Division I Women’s Basketball Championship, 80–61 over Notre Dame. Griner was named the Final Four’s Most Outstanding Player. Baylor finished its undefeated season with 40 wins, the most in NCAA history.

After winning the championship on April 3, 2012, Griner decided to withdraw her candidacy for a roster spot on the 2012 U.S. Olympic women’s basketball team. A month later Griner broke her wrist after jumping off her skateboard when she was going down a ramp.

Her college career came to an end in the 2013 NCAA women’s basketball tournament when Baylor lost to the University of Louisville Cardinals in the sweet 16.