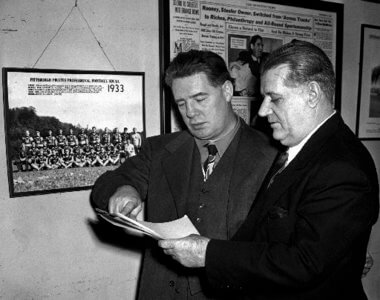 The 1940s would prove a tumultuous and ultimately triumphant decade for the young club. In 1940, the team moved from Philadelphia Municipal Stadium to Shibe Park. Lud Wray’s half-interest in the team was purchased by Art Rooney, who had just sold the Pittsburgh Steelers to Alexis Thompson. Soon thereafter, Bell/Rooney and Thompson swapped franchises, but not teams. Bell/Rooney’s entire Eagles’ corporate organization, including most of the players, moved to Pittsburgh The Steelers’ corporate name remained “Philadelphia Football Club, Inc.” until 1945, and Thompson’s Steelers moved to Philadelphia, leaving only the team nicknames in their original cities. Since NFL franchises are territorial rights distinct from individual corporate entities, the NFL does not consider this a franchise move and considers the current Philadelphia Eagles as a single unbroken entity from 1933.