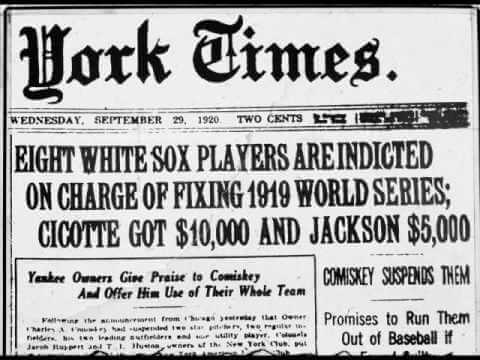 In September 1920, an investigation into a fixed Cubs game eventually turned in the direction of the 1919 Series. During the investigation, Cicotte and Jackson confessed. Comiskey, who himself had turned a blind eye to the rumors previously, was compelled to suspend the remaining seven players (Gandil, eventually perceived as the ringleader, the one “connected” to the gamblers, had retired after the 1919 season) before their last season series against the St. Louis Browns. The suspensions ground the team to a halt; they lost two out of three games to the Browns and finished second, two games behind the Cleveland Indians. However, the evidence of their involvement (signed confessions) disappeared from the Cook County courthouse, and lacking that tangible evidence, a criminal trial (whose scope was limited to the question of defrauding the public) ended in acquittals of all the players. Regardless, with the public’s trust of the game of baseball at stake, newly installed Commissioner of Baseball Kenesaw Mountain Landis banned all the accused from baseball for life.