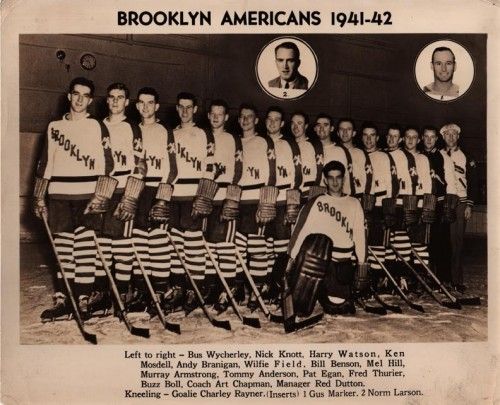 At wit’s end, Dutton changed the team’s name for the 1941 – 1942 NHL season to the Brooklyn Americans. He had every intention to move the team to Brooklyn, but there was no arena in that borough suitable enough even for temporary use. As result, they continued to play their home games in Manhattan at Madison Square Garden while practicing in Brooklyn. They barely survived the season, finishing with a record of 16–29–3. After the season, the Amerks suspended operations for the war’s duration. In 1945, a group emerged willing to build a new arena in Brooklyn. However, in 1946, the NHL reneged on previous promises to reinstate the Amerks and canceled the franchise. Although Dutton had every intention of returning the Amerks to the ice after World War II, NHL records list the Amerks as having “retired” from the league in 1942.