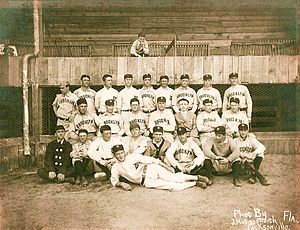 1899 - Brooklyn Team Formation and Many Nicknames

The Dodgers were originally founded in 1883 as the Brooklyn Atlantics, taking the name of a defunct team that had played in Brooklyn before them. The team joined the American Association in 1884 and won the AA championship in 1889 before joining the National League in 1890. They promptly won the NL Championship their first year in the League. The team was known alternatively as the Bridegrooms, Grooms, Superbas, Robins, and Trolley Dodgers before officially becoming the Dodgers in the 1930s.