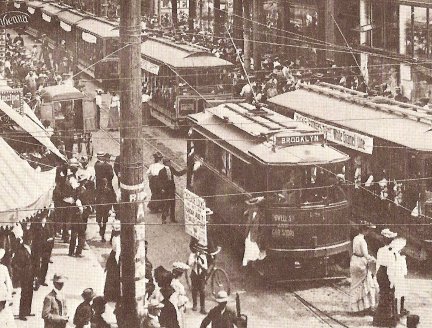 The team name, Brooklyn Trolley Dodgers, was coined in 1895. The nickname was still new enough in September 1895 that a newspaper could report that “‘Trolley Dodgers’ is the new name which eastern baseball cranks [fans] have given the Brooklyn club.” In 1895, Brooklyn played at Eastern Park, bounded by Eastern Parkway (now Pitkin Avenue), Powell Street, Sutter Avenue, Van Sinderen Street, where they had moved early in the 1891 season when the second Washington Park burned down. Some sources erroneously report that the name “Trolley Dodgers” referred to pedestrians avoiding fast cars on streetcar tracks that bordered Eastern Park on two sides. However, Eastern Park was not bordered by street-level trolley lines that had to be “dodged” by pedestrians. The name “Trolley Dodgers” implied the dangers posed by trolley cars in Brooklyn generally, which is 1892, began the switch from horse-power to electrical power, which made them much faster and was hence regarded as more dangerous. The name was soon shortened to Brooklyn Dodgers.