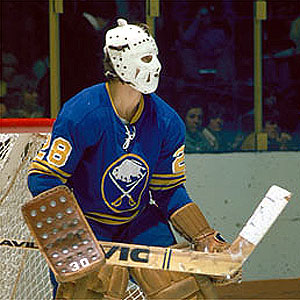 The Sabres, along with the Vancouver Canucks, joined the NHL in the 1970 – 1971 season. Their first owners were Seymour Knox III and Northrup Knox, scions of a family long prominent in Western New York, along with Robert O. Swados, a Buffalo attorney. Buffalo had a history of professional hockey.

Wanting a name other than “bison,” which was common among Buffalo sports teams, the Knoxes immediately commissioned a name-the-team contest. The winning choice, “Sabres,” was chosen because Seymour Knox felt that a sabre, a weapon carried by a leader, could be used effectively on both offense and defense. The Knoxes tried twice before to get an NHL team, first when the NHL expanded in 1967, and again when they attempted to buy the Oakland Seals with the intent of moving them to Buffalo. At the time of their creation, the Sabres exercised their option to create their own AHL farm team, the Cincinnati Swords. Former Toronto Maple Leafs general manager and head coach Punch Imlach was hired in the same capacity with the Sabres.