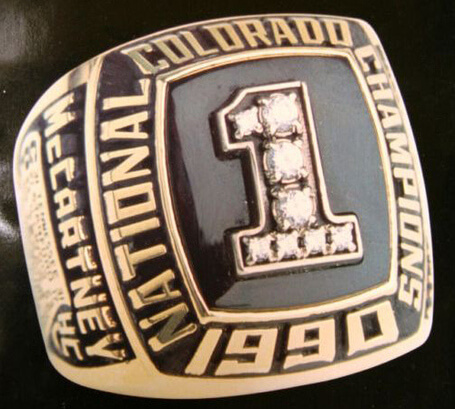 Colorado won its first national championship in 1990 under the direction of head coach Bill McCartney, who helmed the team from 1982 to 1994. The national title was split with Georgia Tech who won the United Press International Coaches Poll, whereas Colorado won the Associated Press and Football Writers Association of America polls. The largest arguments against Colorado were that they had a loss and a tie, whereas Georgia Tech had a tie and no losses, and Colorado’s “unfair” win in the Fifth Down Game against Missouri. Another major controversy was a Colorado’s Orange Bowl win over Notre Dame, which Colorado won in part because of a controversial clipping call that brought back a Notre Dame touchdown. The major argument for Colorado was that they played a more difficult schedule than Georgia Tech. Colorado capped the season with a 10–9 win over Notre Dame in the Orange Bowl, a rematch of the 1989 season Orange Bowl Game which Notre Dame won 21–6. Colorado’s tie came against Tennessee, who was ranked #8, the first week of the season when Colorado was ranked #5. The second week gave the Buffs a scare, scoring with 12 seconds left in the game on a 4th and Goal attempt. The next week gave Colorado its only loss of the season, losing 23–22 to Illinois and dropping Colorado to #20 in the polls. Colorado then went on to beat teams ranked (at the time) #22 Texas, #12 Washington, #22 Oklahoma, and #3 Nebraska. They ended the season 7–0 in the Big Eight Conference for the second straight season. They then capped the season with a win over Notre Dame who were number 1 until a loss in their second to last game of the regular season.