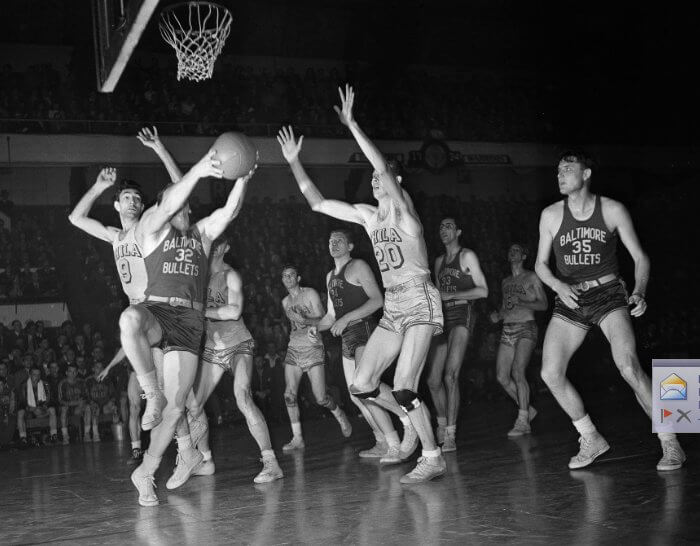 The Baltimore Bullets accepted an invitation to join the Basketball Association of America. The league which was attempting to become the first major professional basketball league had four teams fold following its first season and we’re looking for an eighth member. After losing to the Washington Capitols 63-55 in their first game on November 12th. The Baltimore Bullets earned their first BAA win in their home opener one day later, beating the Boston Celtics 85-74 to start a nine-game winning streak. The Bullets would not be able to maintain their early success as their winning streak was immediately followed up by a five-game losing streak. However, in the Western Division, they remained in the playoff chase all season, as all four teams finished within one game of first place. The Bullets would have five players average more than ten points per game, as Player-Coach Buddy Jeanette was a second-team all-star, while Paul Hoffman was the BAA’s top rookie performer. The Bullets would end the season with a record of 28-20, in a three-way tie for second place. The Bullets would play in a round-robin for the last two playoff slots in the West, beating the Chicago Stags 75-72 for second place. The Bullets would see the Stags again in the semifinals, after beating the New York Knickerbockers in a best of three series with the home team taking each game. Facing the Stags the Bullets would win two straight to advance to the BAA Finals. In the BAA Finals, the Baltimore Bullets faced the reigning champion Philadelphia Warriors. After suffering a 71-60 loss in the opener, the Bullets squeezed out a 66-63 win in Game 2 to even the series. The Bullets would defend their home court in the next two games, winning by scores of 72-70 and 78-75 to take a 3-1 series lead. Following a 91-82 loss in Philadelphia in Game 5, the Bullets would crush the Warriors 88-73 to capture the BAA’s second championship.