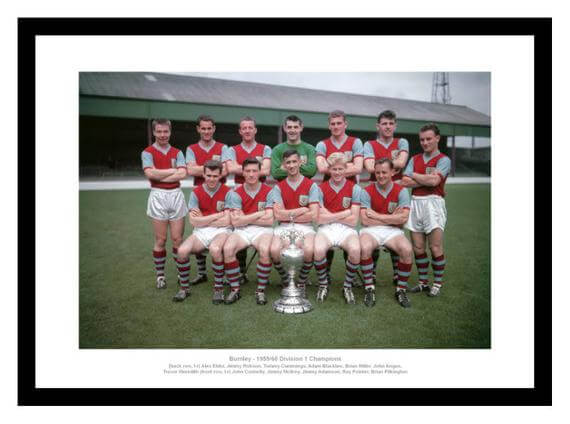 Burnley endured a tense 1959–60 season in which Tottenham Hotspur and Wolverhampton Wanderers were the other protagonists in the chase for the league title. The team ultimately clinched their second First Division championship on the last day of the season with a 2–1 victory at Manchester City, with goals from Brian Pilkington and Trevor Meredith. Although the team had been in contention all season, Burnley had never led the table until this last match was played out. Potts only used 18 players throughout the whole season, as John Connelly became Burnley’s top scorer with 20 goals. The Lancastrians’ title-winning squad cost only £13,000 (equivalent to £300,000 in 2020) in transfer fees — £8,000 on McIlroy in 1950 and £5,000 on left-back Alex Elder in 1959. The other players all came from the Burnley youth academy. The town of Burnley became the smallest to have an English first-tier champion since it counted 80,000 inhabitants. After the season finished, Burnley went to the United States to participate in the inaugural international football tournament in North America, the International Soccer League.