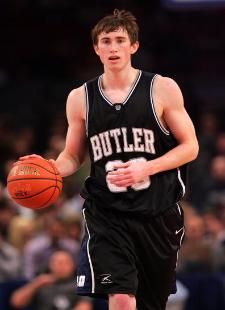 Hayward was listed as an unranked three-star prospect on the recruiting website Rivals.com. He accepted a scholarship offer from Butler University, coached by Brad Stevens, despite late interest from Purdue and Michigan.

Butler lost to Duke in the championship game of the 2010 NCAA Division I Men’s Basketball Tournament. In the final seconds, Hayward attempted a game-winning, buzzer-beating, half-court shot, which hit the backboard and rim, and bounced away. The shot is considered one of the most well-known plays in NCAA tournament history. Hayward was selected to the All-Tournament Team.