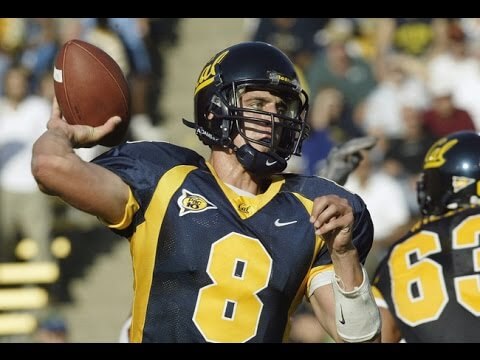 As a junior, Rodgers led Cal to a 10–1 record and top-five ranking at the end of the regular season, with their only loss a 23–17 loss at No. 1 USC. In that game, Rodgers set a school record for consecutive completed passes with 26 and tied an NCAA record with 23 consecutive passes completed in one game. He set a Cal single-game record for passing completion percentage of 85.3. Rodgers holds the Cal career record for the lowest percentage of passes intercepted at 1.95 percent. Rodgers’ performance set up the Golden Bears at first and goal with 1:47 remaining and a chance for the game-winning touchdown. On the first play of USC’s goal-line stand, Rodgers threw an incomplete pass. This was followed by a second-down sack by Manuel Wright. After a timeout and Rodgers’ incomplete pass on third down, USC stopped Cal’s run play to win the game. Rodgers commented that it was “frustrating that we couldn’t get the job done.” Overall, he finished the 2004 season with 2,566 passing yards, 24 touchdowns, and eight interceptions. His 66.1% pass completion percentage led the Pac-10.

After Texas was picked over Cal for a Rose Bowl berth, the fourth-ranked Bears were awarded a spot in the Holiday Bowl, which they lost to Texas Tech, 45–31. After the season, Rodgers decided to forgo his senior season to enter the 2005 NFL Draft.