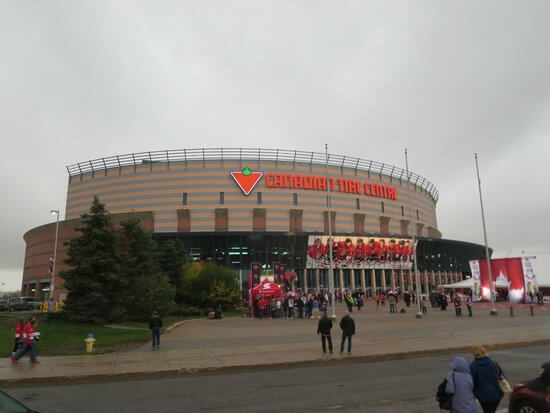 As part of its bid to land an NHL franchise for Ottawa, Terrace Corporation unveiled the original proposal for the arena development at a press conference in September 1989. The proposal included a hotel and 20,500 seat arena, named The Palladium on 100 acres (0.40 km2), surrounded by a 500-acre (2.0 km2) mini-city, named “West Terrace.” The site itself, 600 acres (2.4 km2) of farmland, on the western border of Kanata, had been acquired in May 1989 by Terrace. Rezoning approval was granted by the Board on August 28, 1991, with conditions. The conditions imposed by the board included a scaling down of the arena to 18,500 seats, a moratorium on development outside the initial 100-acre (0.40 km2) arena site, and that the cost of the highway interchange with highway 417 is paid by Terrace. A two-year period was used seeking financing for the site and interchange by Terrace Corporation. The corporation received a $6 million grant from the federal government but needed to borrow to pay for the rest of the costs of construction. A ground-breaking ceremony was held in June 1992 but actual construction did not start until July 7, 1994. Actual construction took 18 months, finishing in January 1996.