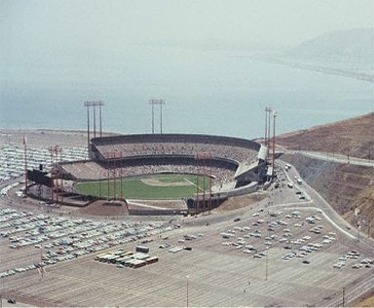 In 1960, the Giants moved to Candlestick Park sometimes known simply as “The ‘Stick”, a stadium built on Candlestick Point in San Francisco’s southeast corner overlooking San Francisco Bay. The new stadium quickly became known for its strong, swirling winds, cold temperatures and thick evening fog that made for a formidable experience for brave fans and players. Its built-in radiant heating system never worked. Candlestick’s reputation was sealed in the ninth inning of the first 1961 All-Star Game when, after a day of calm conditions, the winds came back and a strong gust appeared to cause Giants relief pitcher Stu Miller to slip off the pitching rubber during his delivery, resulting in a balk and a baseball legend that Miller was “blown off the mound”, although the National League won anyway. Two All-Star Games per season were played from 1959 to 1962.

Candlestick Park was frequently beshrouded in fog, both inside and out, coming in from the Pacific Ocean seven miles to the west (through what is known as the “Alemany Gap”, a wide gorge ocean winds come through in lieu of major topographical obstacles). A foghorn was eventually situated and sounded inside the stadium between innings, adding to Candlestick’s already notorious meteorological reputation. Winds would whirl around in the parking lot at other times while it would be calm inside the stadium. Even with its cold, windy and foggy reputation, it stood its ground when the ground below it shook violently just before the scheduled start of Game 3 of the 1989 World Series. At 5:04 pm, the Loma Prieta Earthquake shook the San Francisco Bay Area during the pregame ceremonies. For 15 seconds the stadium rocked, and it was feared that one or more of the huge overhead light towers might fall on spectators in the stands; but only minor injuries were reported and the stadium’s structure was deemed safe ten days later.