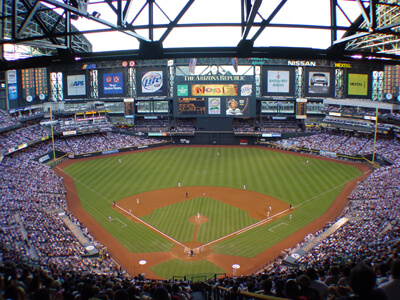 Chase Field is a stadium located in downtown Phoenix, Arizona, and is the home of the Arizona Diamondbacks of Major League Baseball. It opened in 1998, in time for the Diamondbacks’ first game as an expansion team. Chase Field was the first stadium built in the United States with a retractable roof over a natural-grass playing surface.

The park was built during a wave of new, baseball-only parks in the 1980s and 1990s. Although nearly all of these parks were open-air, it was taken for granted that a domed stadium was a must for a major-league team to be a viable venture in the Phoenix area. Phoenix is by far the hottest major city in North America; the average high temperature during baseball’s regular season is 99.1 °F (37.3 °C), and game-time temperatures well above 100 °F (38 °C) are very common during the summer.