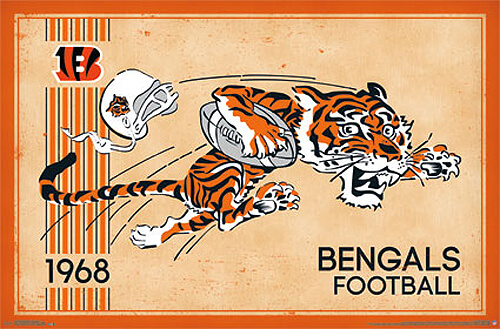 By 1966, Paul Brown wanted to become involved in professional football again. James A. Rhodes, then the governor of Ohio, convinced Brown that Ohio needed a second team. Cincinnati was deemed the logical choice, in essence, splitting the state. In 1967 a Cincinnati-based ownership group led by Paul Brown was granted a franchise in the American Football League.

Brown named the team the Bengals in order “to give it a link with past professional football in Cincinnati.” Another Bengals team existed in the city and played in a previous American Football League from 1937 to 1942. Possibly as an insult to Art Modell, Paul Brown chose the exact shade of orange used by his former team. He added black as the secondary color. Brown chose a very simple logo: the word “BENGALS” in black lettering. Ironically, one of the potential helmet designs Brown rejected was a striped motif that was similar to the one featuring the “varicose pumpkin” helmets adopted by the team in 1981 and which is still in use to this day; however, that design featured orange stripes on a black helmet which were more uniform in width.