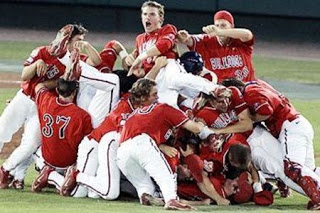 The 2008 tournament culminated with 8 teams advancing to the College World Series at historic Rosenblatt Stadium in Omaha, Nebraska on June 14.

The Fresno State Bulldogs beat the Georgia Bulldogs in the best-of-three championship series to win the NCAA Men’s Division I Baseball Championship. Fresno State became the lowest-seeded team (4th in the Regionals) to win the National Championship in NCAA history, and the fifth consecutive baseball team to win the title that was not one of the eight national seeds. They were considered a “Cinderella” team throughout the tournament. This was only the third national championship of any kind in school history, following the 1968 NCAA Men’s Tennis Tournament and the 1998 NCAA Division I Softball National Champions.

Fresno State sophomore third baseman Tommy Mendonca won the Most Outstanding Player Award. Tommy hit four home runs and had 11 RBIs and also made a number of spectacular plays in the field.