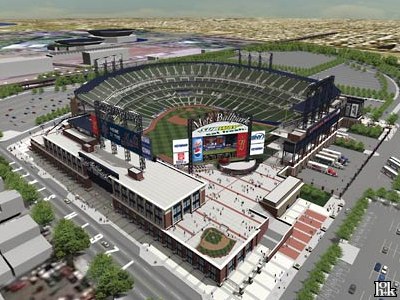 The 2009 season was the Mets’ first season at Citi Field, a retro park following current architectural trends in stadium design. It follows the brick and steel-truss trend begun by the Orioles at Oriole Park at Camden Yards in 1992. The exterior facade resembles Ebbets Field, the former home of the Brooklyn Dodgers. The Mets’ first exhibition game at Citi Field was played on April 3, 2009, against the Boston Red Sox. The first regular-season home game was on April 13, 2009, against the San Diego Padres, who spoiled the opener with a 6–5 win against the Mets. In that game, Jody Gerut of the Padres became the first player to open a new ballpark with a leadoff home run. On April 17, Gary Sheffield, who just days earlier was signed by the Mets as a free agent, hit his 500th home run against the Milwaukee Brewers. Sheffield became the first pinch hitter to reach this milestone, as well as the first to do it in a Mets uniform.