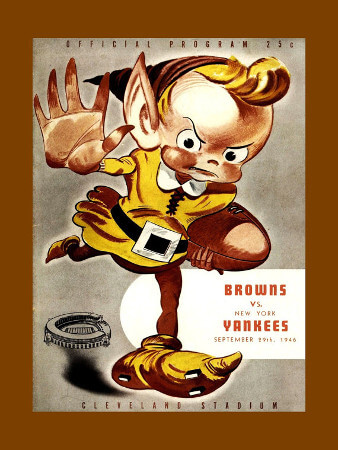 The Browns origins date to 1944, when taxi cab magnate Arthur B. “Mickey” McBride secured the rights to a Cleveland franchise in the newly formed All-America Football Conference. The AAFC was to compete with the dominant National Football League once it began operations at the end of World War II, which had forced many professional teams to curtail activity, merge or go on hiatus as their players served in the U.S. military. The name of the team was at first left up to Paul Brown, who rejected calls for it to be christened the Browns. The franchise then held a naming contest to publicize the team, promising a $1,000 war bond to the winner. In June 1945, a committee selected “Panthers” as the new team’s name. McBride, however, changed it to the Browns two months later, the result of another naming contest that suggested Browns, not after Paul Brown himself, but as a shortened version of Brown Bombers, a reference to the nickname of boxer Joe Louis. Some sources say McBride was asked for thousands of dollars in compensation from a businessman who owned the rights to the name Cleveland Panthers, an earlier failed football team.