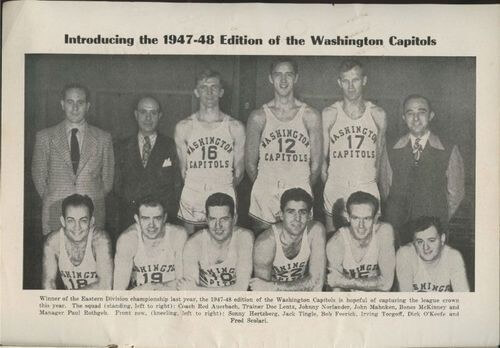 Red caught the eye of Washington millionaire Mike Uline, who hired him to coach the Washington Capitols in the newly founded Basketball Association of America (BAA), a predecessor of the NBA.

In the 1946 – 1947 BAA season, Auerbach led a fast break-oriented team built around early BAA star Bones McKinney and various ex-Navy players to a 49–11 win-loss record, including a standard-setting 17-game winning streak that stood as the single-season league record until 1969. In the playoffs, however, they were defeated by the Chicago Stags in six games.

The next year the Capitols went 28–20 but were eliminated from the playoffs in a one-game Western Division tie-breaker. In the 1948 – 1949 BAA season, the Caps won their first 15 games and finished the season at 38–22. The team reached the BAA Finals but were beaten by the Minneapolis Lakers, who were led by Hall-of-Fame center George Mikan. In the next season, the BAA and the rival league National Basketball League merged to become the NBA, and Auerbach felt he had to rebuild his squad. However, owner Uline declined his proposals, and Auerbach resigned.