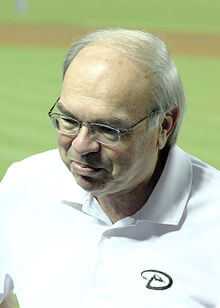 By this time Colangelo and the other partners were embroiled in a dispute over the financial health and direction of the Diamondbacks and notably including over $150 million in deferred compensation to many players who were key members of the 2001 World Series-winning team and others. Colangelo’s willingness to go into debt and acquire players through free agency had led to one of the quickest free falls in major sports history. He was forced to resign from his managing general partner post in the late summer of 2004. Colangelo sold his interest in the General Partnership of the Diamondbacks to a group of investors who were all involved as partners in the founding of the team in 1995. The investors include equal partners Ken Kendrick, Mike Chipman, and Jeffrey Royer. Jeff Moorad, a former sports agent, joined the partnership and was named the team’s CEO; becoming its primary public face. Ken Kendrick became the managing general partner.