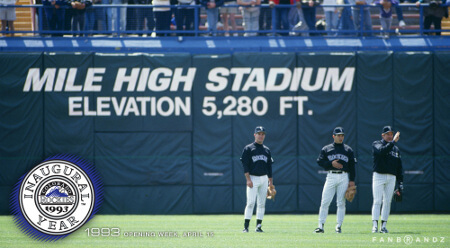 Colorado Rockies began in 1991 when a Major League Baseball expansion franchise for Denver was granted to an ownership group headed by John Antonucci. In 1993 the Colorado Rockies started to play in the western division of the National League. The Colorado Baseball Commission, led by banking executive Larry Varnell, was successful in getting Denver voters to approve a 0.1 percent sales tax to help finance a new baseball stadium. Also, an advisory committee was formed in 1990 by the then-Governor of Colorado Roy Romer to recruit an ownership group. The group selected was led by John Antonucci, an Ohio beverage distributor, and Michael I. Monus, the head of the Phar-Mor drugstore chain. Local and regional companies such as Erie Lake, Hensel Phelps Construction, KOA Radio, and the Rocky Mountain News rounded out the group. On July 5, 1991, the National League approved Denver and south Florida as the sites for two expansion teams to begin to play in 1993.