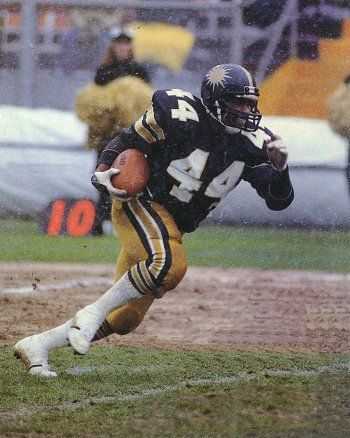 Unfortunately, just after Davis took over, the USFL announced that it would switch to a fall schedule for the 1986 season. Knowing that the Gold could not even begin to compete directly with the Broncos, Spedding was one of two owners (the other being Tampa Bay Bandits owner John F. Bassett) to vote to stay on a spring schedule. His guess proved right. While the Gold had been one of the USFL’s attendance leaders, fans in the Denver area were not about to abandon the Broncos. Despite finally getting into the playoffs with an 11-7 record, the Gold’s attendance crashed from over 20,000 to 14,400 fans per game.

As a result, despite finishing second in the Western Conference, they were forced to play on the road against the lower-seeded Memphis Showboats under pressure from ABC. The network, which had considerable influence over the USFL due to the structuring of the league’s television contract, did not want the embarrassment of having a game played in a near-empty stadium.

With the Gold’s viability destroyed by the planned move to the fall, Spedding sold the Gold’s player contracts to the Jacksonville Bulls. Although the move was billed as a merger, Spedding retained the Gold’s intellectual properties. He seriously considered joining Bassett’s proposed spring football league before Bassett’s failing health prevented that league from launching. Instead they, and the USFL as a whole were doomed by the ill-advised attempt to move the playing season to the fall in direct competition with the more established league. The league’s high-stakes anti-trust suit against the NFL awarded only $3 to the USFL. The jury cited the league’s abandonment of Denver and several other major markets as one reason why it awarded the USFL only nominal damages. With no new funds to cover their irresponsible spending, the league folded.