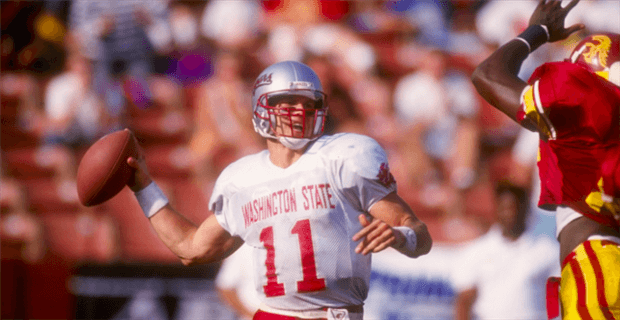 Bledsoe had a record-setting career in his three years at Washington State. After gaining the starting job at the end of the 1990 season as a true freshman (joined later by Jeff Tuel as the only two in school history), he quickly became the face of the Cougars offense. In 1992 Bledsoe led his team to a 9–3 record (ranking #10 in the coaches poll and #12 in the AP) and a 31–28 win against the Utah Utes in the Copper Bowl. Bledsoe completed 30/46 passes for 476 yards and 2 touchdowns in the game. He also established WSU records in single-game passing yards (476), single-season pass completions (241), and single-season passing yards (3,946). He was named the Pac-10 Offensive Player of the Year.

Following an impressive junior year, Bledsoe decided to forgo his senior season and enter the 1993 NFL Draft. In the 34 starts of his collegiate career, he amassed 9,373 yards, 532 completions, and 66 touchdowns.