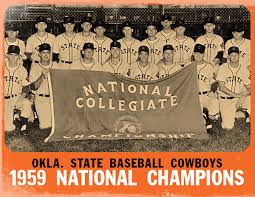 The 1959 Cowboys baseball team entered the season not expected to do much. Only four players left fielder Don Soergel, and pitchers Roy Peterson, Joel Horlen, and Dick Soergel, were on the roster from the previous season. The preseason prospectus for 1959 read, “The baseball outlook for coach Toby Greene’s 16th edition of Cowboy baseball is quite questionable. Despite the return of key members from last year’s pitching staff, it’s hard to consider the Pokes much of a threat with graduation, grades, and the pros robbing the veteran OSU mentor of all but one of his starters.” The team compiled a 17–3 conference record, winning the Big Eight conference title.

OSU opened the 1959 national tournament with a 10–2 victory over Western Michigan behind a Joel Horlen five-hitter. They had to rally for three runs in the seventh in its next game against Penn State and won 8–6 with eleven team hits. In their next game, the Cowboys lost to Arizona by a score of 5–3, as Soergel lost his first career game in twelve decisions. In the losers bracket, the Pokes found themselves down 3–2 in the ninth but scraped across two runs to earn the 4–3 victory. A Fresno State victory over Arizona that night left three teams with one loss each. Arizona won the coin toss and became the odd man out as Oklahoma State and Fresno State met for the chance to play the Wildcats for the national championship. The Cowboys beat the Bulldogs 4–0 to advance to the championship game.