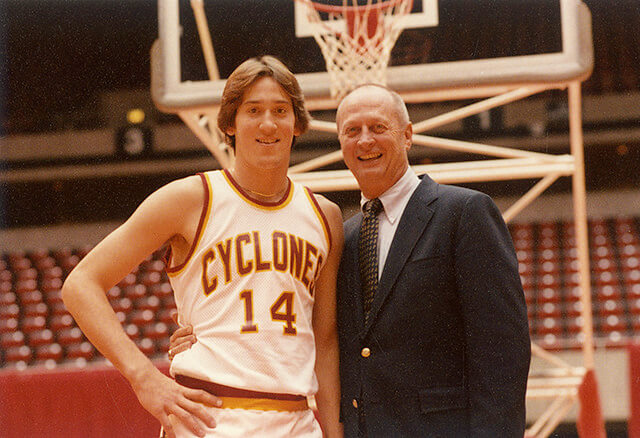 Hornacek redshirted at Iowa State University (ISU) in 1981; he was a team walk-on who played from 1982 to 1986. The son of a high school basketball coach, he became an all-conference player in the Big Eight Conference, playing for coach Johnny Orr. As a point guard, he guided the Cyclones to the Sweet Sixteen of the 1986 NCAA tournament. His shining moment came at the Metrodome in Minneapolis when, after first hitting a shot to tie the game and send it to overtime, Hornacek hit the game-winning shot in overtime, a 26-foot jumper at the buzzer, to give ISU its first NCAA tournament victory since 1944, beating Miami University, March 14, 1986, 81–79. Two days later, he led the Cyclones to the NCAA Tournament Sweet Sixteen, in a 72–69 upset of second seed Michigan. Orr, who had previously left Michigan to coach at Iowa State, called it the greatest victory of his career. Hornacek left ISU with a Big-8 record of 665 career assists and 1,313 career points. He was the fourth player in Cyclone basketball history to have his number retired when his No. 14 jersey was hung from the rafters of Hilton Coliseum in 1991.