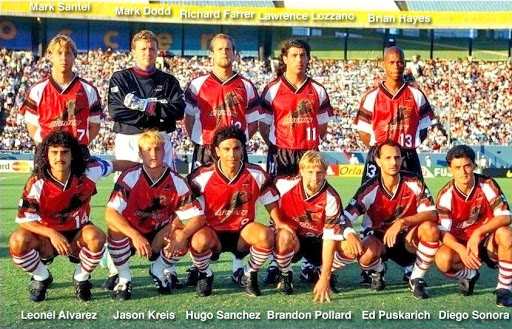 Dallas was awarded a Major League Soccer franchise on June 6, 1995, the same day as teams were awarded to Kansas City and Colorado. The team was given its name for the burning in the Texan oilfields and the state’s hot weather. On October 17, former Mexico international Hugo Sánchez was designated to the team as their first player. Initially not attracting investors, the Burn was financed by the league itself.

On April 14, 1996, the Dallas Burn played their first game, defeating the San Jose Clash in a shootout win in front of a crowd of 27,779 fans at the Cotton Bowl.[2] Five days later, Jason Kreis scored the team’s first goal in a 3–0 home win over the Wiz. With a record of 17–15, the Burn finished in second in the Western Conference behind the Los Angeles Galaxy. They lost in the best of three playoff semifinals to the Wiz after three games, the last one being decided by a shootout. Their first campaign in the U.S. Open Cup ended with a 2–3 home defeat in the semi-finals against D.C. United. In their second season, the Burn again reached the playoffs, where they lost in the conference finals to the Colorado Rapids. Later in 1997, they won their first U.S. Open Cup by defeating the MLS Cup champions, D.C. United. In 1999, striker Kreis was voted the league’s MVP for a season in which he became the first player to reach 15 goals and 15 assists. That season ended in the playoffs with a defeat to the Galaxy in the conference finals. In October 2000, head coach Dave Dir was fired, despite again taking the team to the playoffs for the fifth consecutive time.