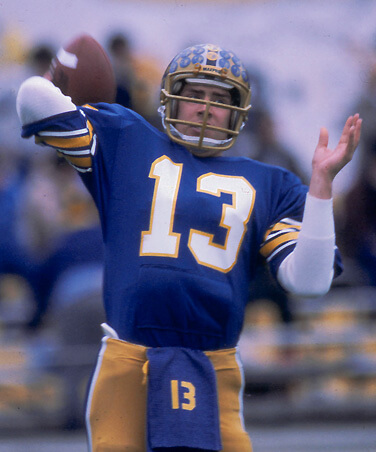 Marino attended the University of Pittsburgh and played for the university’s Pittsburgh Panthers football team from 1979 to 1982. As a freshman in 1979, Marino led the Panthers in a 24–17 triumph over West Virginia in the Backyard Brawl and a 29−14 win over longtime rival Penn State. Pitt’s 1980 Marino-led team finished No. 2 in the season-ending rankings (The New York Times computer poll rated Pitt as No. 1). Marino was part of an elite team during those two years that included two other future NFL Hall of Fame players: Defensive lineman Rickey Jackson and center Russ Grimm, as well as future Pro Bowl linebacker Hugh Green and future Pro Bowl guard Mark May. In 1980, Pitt added future NFL players Bill Maas, Dwight Collins, and Tim Lewis, while their offensive line got a third future Pro Bowl player: tackle Jimbo Covert. “There were games when my uniform never got dirty,” Marino once remarked. “There were games when I never hit the ground. That’s incredible.”

Following the 1981 regular season, Marino led the Panthers, who had been ranked No. 1 most of the season, to a last-minute triumph over the No. 7 Georgia Bulldogs in the 1982 Sugar Bowl by throwing a game-winning pass to tight end John Brown with less than a minute remaining in the game. Marino later cited this as the most memorable pass he’d thrown in his college career. Overall, during the three seasons from 1979 thru 1981, Pitt garnered 33 wins with only 3 losses (three straight 11–1 season) and was constantly ranked in the Top 5 of both major media polls. The Pitt football team’s fortunes and Marinos’s statistics dipped during his senior year, which saw the team transition from head coach Jackie Sherrill to new coach Foge Fazio, culminating in a 7–3 loss in the 1983 Cotton Bowl Classic to Southern Methodist University and their “Pony Express” of Eric Dickerson and Craig James. Marino finished ninth in voting for the Heisman Trophy in 1982, after finishing fourth the previous year. Marino finished his four college seasons with 7,905 passing yards and 74 touchdowns, with 64 interceptions.