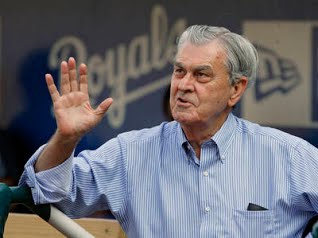 David Glass became the interim CEO and Chairman of the Board of Directors of the Royals on September 23, 1993, following the death of the founding owner, Ewing Kauffman. Under Glass’ leadership, the board cut the payroll budget from $41 million to $19 million. During the Major League Baseball strike of 1994 – 1995, Glass opposed any settlement with the players’ union without a salary cap, and supported the use of strike breaking “replacement” players, despite a court ruling that the use of replacement players violated federal labor law.

On April 18, 2000, Glass became sole owner of the Royals, purchasing the organization from the Kauffman estate for $96 million. The Board approved his offer despite a competing bid of $120 million by Miles Prentice. However, MLB rejected Prentice’s offer because he didn’t have enough net worth to withstand substantial losses. With none of the area’s wealthy families willing to even consider making a bid for the Royals–or any other existing or prospective professional team in Kansas City Glass was the only credible bidder who was interested in keeping the team in Kansas City. An original stipulation of the sale was that any profits from Glass’ sale of the Royals must go to charity, but that clause has since expired.