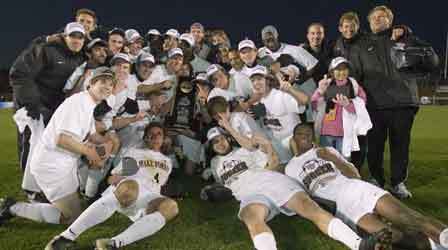 The most successful season in team history took place in 2007 when Wake Forest won the NCAA Division I Championship in a 2–1 decision over Ohio State. It marked the program’s only championship to date. During their championship run, the No. 2 seeded Deacons defeated Furman 1–0, No. 15 West Virginia 3–1, and No. 10 Notre Dame 2–1 in overtime to reach the College Cup. In the semifinals, Marcus Tracy scored twice in a 2–0 win over Virginia Tech. In the final, Wake Forest scored two second-half goals to come from behind to defeat Ohio State 2-1 to win the National Championship.