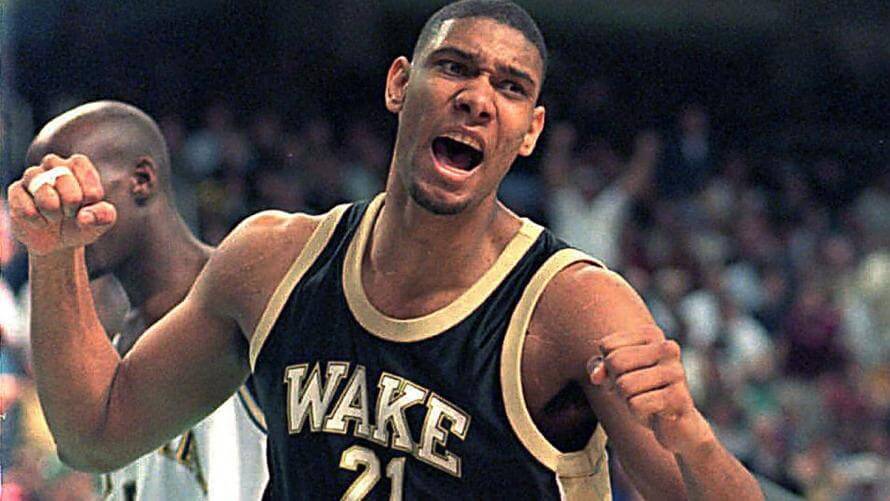 During the 1995–96 NCAA season, the Wake Forest team lost Childress, who had graduated the previous season and entered the NBA. In Childress’s absence, Duncan led the team to a 12–4 record for their ACC season, and a 26–6 record overall. The Demon Deacons won the ACC Finals again, but in the Sweet 16, Duncan came down with the flu, and his team missed the Final Four. His season averages of 19.1 points and 12.3 rebounds per game led to another ACC Defensive Player of the Year award and his first ACC Player of the Year award. Although the Wake Forest star was now rumored to be entering the 1996 NBA draft, he stayed in college.

In the 1996–97 NCAA season, new 7 ft 1 in (2.16 m) Demon Deacon and future NBA player Loren Woods eased the pressure on Duncan close to the basket. The 1996-97 team won their first 13 games, but then came a slump, and they failed to win a third ACC title. Later, during the NCAA tournament, Stanford University, led by future NBA point guard Brevin Knight, eliminated Wake Forest with a 72–66 win. Duncan finished his senior season with career-high averages of 20.8 points, 14.7 rebounds, and 3.2 assists per game while shooting .606 from the field and winning the Defensive Player of the Year for a third straight season. He earned first-team All-American honors for the second time and was a unanimous pick for both the Oscar Robertson Trophy and Naismith College Player of the Year. Duncan was first in the 1996–97 NCAA Division I in rebounding, tenth in blocked shots (3.3 bpg), and 28th in scoring (20.8 ppg). He has voted ACC Player of the Year again and, based on the votes of sportscasters and news writers won the 1997 John Wooden Award as the NCAA’s best overall male player.

In contrast to contemporary prep-to-pro players like Kevin Garnett, Jermaine O’Neal, Tracy McGrady, or Kobe Bryant, Duncan stayed in college for a full four years. During that period, he was a two-time ACC Player of the Year and a three-time NABC Defensive Player of the Year. The center also made the All-ACC Tournament between 1995 and 1997 and the All-ACC First Team between 1995 and 1997. In 1996, he led the ACC in scoring, rebounding, field goal percentage, and blocked shots, becoming the first player in conference history to lead all four of those categories. That same year, he was also named Most Valuable Player of the ACC Tournament. Overall, Duncan led his team to a 97–31 win-loss record and finished his college career as the all-time leading rebounder in NCAA history in the post-1973 era (a mark later surpassed by Kenneth Faried). Duncan left college as the all-time leading shot-blocker in ACC history with 481 blocks—at the time second in NCAA annals behind Colgate’s Adonal Foyle—and third on the ACC career rebounding list with 1,570 rebounds.

In college, Duncan co-authored a chapter in the social psychology book Aversive Interpersonal Behaviors. After earning his college degree, Duncan became eligible for the 1997 NBA draft.