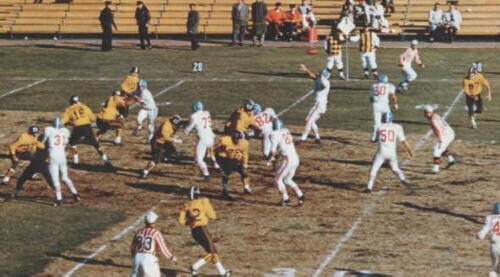 In the summer of 1959, Bob Howsam, owner of minor league baseball’s Denver Bears, had a problem. He’d expanded Bears Stadium to 34,000 after Denver was named a charter member of the Continental League, a proposed third major league. However, the league died when the established major leagues granted expansion franchises to two of its cities (New York and Houston) and moved an established team to a third (the Twin Cities). Howsam was now saddled with a heavy debt load and a stadium far too big for a minor-league team.

Howsam concluded the only way out of his financial bind was to extend Bears Stadium’s season by bringing football to Denver. He first tried to get an expansion NFL franchise to Denver, but he was denied a team by NFL owners under the leadership of Chicago Bears owner George Halas. The snub led Howsam and four others to start up a rival to the NFL. The new league, the American Football League, announced its formation on August 14, 1959, with Howsam’s Denver team as a charter member. A 1960 “name-the-team” contest yielded the nickname “Broncos.” The first general manager of the new team was Dean Griffing, and the first head coach was Frank Filchock.