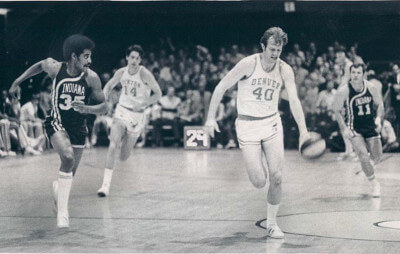 In 1967, one of the ABA’s charter franchises was awarded to a group in Kansas City, Missouri headed by Southern California businessman James Trindle. However, Trindle was unable to find a suitable arena in the Kansas City area. League commissioner George Mikan suggested moving the team to Denver. After agreeing to name Denver native and former NBA player Vince Boryla as general manager, Trindle moved his team to Denver as the Denver Larks, named after the Colorado state bird. The Trindle group was severely undercapitalized, leading Mikan to order the Larks to post a $100,000 performance bond or lose the franchise. Hours before the deadline, Trindle sold a two-thirds controlling interest to Denver trucking magnate Bill Ringsby for $350,000. Ringsby then renamed the team the Rockets, after his company’s long-haul trucks.