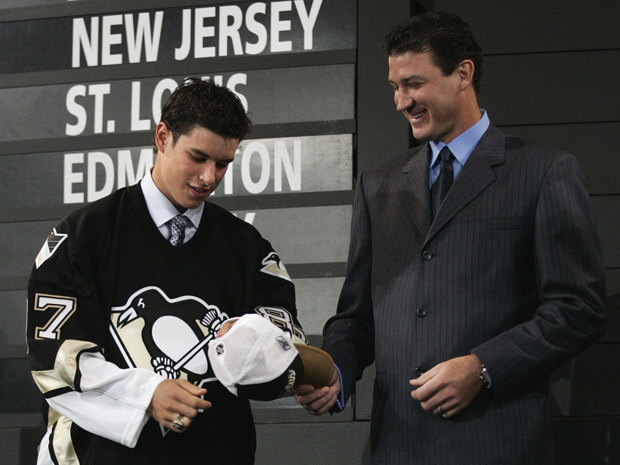 Entering the 2005 NHL Entry Draft, Crosby was listed first overall in the NHL Central Scouting Bureau and International Scouting Services’ respective rankings of prospects. He had also won the Mike Bossy Trophy as the QMJHL’s best prospect. Crosby went on to be selected first overall in the draft by the Pittsburgh Penguins on July 30, 2005. Due to the labour stoppage that suspended the entire 2004 – 2005 NHL season, positioning for the 2005 draft was conducted via a weighted lottery based on each team’s playoff appearances and draft lottery victories in the last four years. This lottery system led to the draft being popularly referred to as the Sidney Crosby Lottery or the Sidney Crosby Sweepstakes.

Crosby made his NHL debut on October 5, 2005 against the New Jersey Devils, and registered an assist on the team’s first goal of the season, scored by Mark Recchi in a 5–1 loss. He scored his first NHL goal in the Penguins’ home opener on October 8 against goaltender Hannu Toivonen of the Boston Bruins. Despite also having registered two assists for a three-point night, the Penguins were defeated 7–6 in overtime. Crosby began his rookie season playing alongside Hall of Famer Mario Lemieux. Unfortunately, Lemieux was forced to retire due to an irregular heartbeat after having played just 26 games of the season.