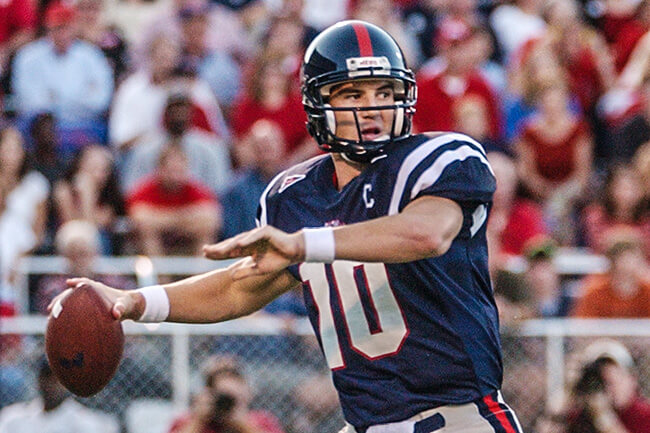 Manning started off his senior season with a 2–2 record. He played well in that stretch with 1,329 passing yards, 11 touchdowns, and four interceptions with victories over Vanderbilt and Louisiana-Monroe but losses to Memphis and Texas Tech. The Rebels went on a six-game winning streak that included victories over major SEC opponents #24 Florida, Alabama, #21 Arkansas, South Carolina, and Auburn. Manning passed for 1,552 yards, 12 touchdowns, and four interceptions in the winning streak. Overall, he led the Rebels to a 10–3 record and a 31–28 SBC Cotton Bowl Classic victory over the #21 Oklahoma State Cowboys with 259 passing yards and two touchdowns in 2003.

As his senior year came to a close, Manning won many awards, including the Maxwell Award as the nation’s best all-around player, the Johnny Unitas Golden Arm Award, the National Football Foundation and College Football Hall of Fame Scholar-Athlete Award, the Sporting News Radio Socrates Award, and the SEC Most Valuable Player Award. He was also a candidate for the 2003 Heisman Trophy, finishing third in the voting after winning quarterback Jason White of the University of Oklahoma and University of Pittsburgh wide receiver Larry Fitzgerald. Manning was a member of Sigma Nu fraternity as was his father, and he was named Sigma Nu Athlete of the Year in 2001 and 2003.

Manning graduated from the University of Mississippi with a degree in marketing and a GPA of 3.44 and was on the Dean’s Honor Roll.